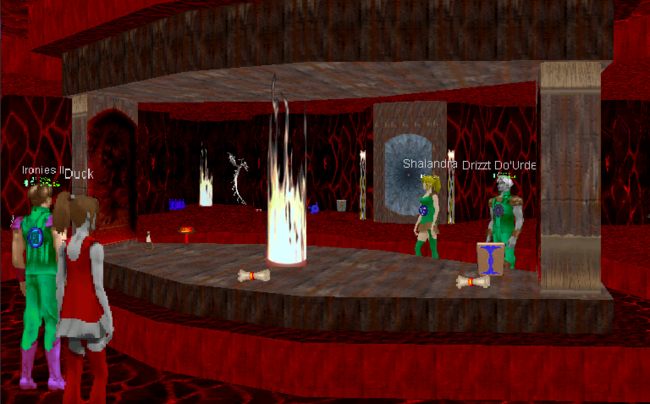 The attempt was conducted at the FateSender Guild, in the Cenotaph of Dread. Present were Starfall, Drizzt do'Urden, Shalandra, Duck, Ironies II, Stormy Edwards, and myself. The altar-like platform at the center of the space was strewn with manuscripts, schematics, reagents and tools. When it became apparent that all were present who were going to attend, Starfall addressed the assembled:

Starfall: "Like the other focus artifacts, this is to be a font. In this case, of Lucidity. Drizzt and Ironies II are familiar with the difficulty of making a truly intangible concept into something tangible. They were my test subjects."

(Some light laughter and banter. When it calmed, Starfall resumed.)

Starfall: "The Everglow isn't fire, just like the Unbroken Flow isn't water. In this case it is the glow itself separated from things which glow, and given solid form unto itself. Our focus element is Lucidity. Clarity of thought, clarity of vision. Our element is likened to fire, because fire has several properties it shares. Fire provides heat, up to and including destruction and consumption. Fire also provides light, driving back the darkness which hides the truth from us. To elucidate is to explain. To make things clearly understood. This artifact will be lucidity in its clearest, truest form. While we work, I am going to ask you to do something complicated. Think about a problem you have. Think about something confusing, frustrating or bothersome. And focus on that thought until you come to some realization about it. Something meaningful to you. When that realization comes to you, I want you to hold onto it."

They then began passing out the tools with which we would perform the attempted creation. Ironies II, Drizzt and myself were given objects which emit light, while Shalandra, Duck and Stormy were given crystals that would be used as focusing lenses. After using hers to stir a cup of tea and licking it clean, Stormy informed me that hers tasted chiefly of plum. While Starfall distributed the tools, the rest of us shut our eyes and fell into contemplation, each conjuring thoughts of some significant personal trouble and hoping for clarity to come. While some jokes were made at first, when we eventually arrived at the genuine objects of our troubles, we did not speak them aloud.

Starfall next instructed us to arrange ourselves into pairs, each with one crystal and one luminous artefact. The pairs became Drizzt and Shalandra, Duck and Ironies II, and Stormy and myself. Thus arranged, we were asked to approach the altar with tools in hand.

Starfall: "Hold that problem in mind. Focus on it. For some of you, some strong feelings might come up related to it. That's okay. The way out is through. You are not looking for a surface level, facile solution to what you are thinking about. But some deeper truth. Take the time you need to reach that place. I ask that you each afford one another the same patience you need for this process. That moment of realization is what we seek. That is the moment of lucidity we are seeking to capture. It may be uncomfortable. It may be something you don't want to see, or acknowledge the truth of. I ask that you show the courage needed to go toward that discomfort rather than away from it."

As a group, we fell into a solemn meditation. One by one, we arrived at length at the realizations Starfall had instructed us to find. Those of us with light-sources were then instructed to hold them aloft, allowing their light to shine on the altar. Those with crystals were asked to position them between the light sources and the altar, focusing the light into beams and bringing them to converge at the very centermost point of the altar's surface. That light, Starfall explained, was our truth, and our certainty. We stepped closer.

Starfall: "Focus on the point where the light converges. Reach into that light with your free hand. Find that thought of yours, get a good grip on it. Your thought is part of that light. On the count of three, we are going to pull that lucidity out of the center."

We dipped our hands into the well of light, as bidden. With thoughtless immediacy, I felt in my fingers the moment of uncomfortable clarity I had experienced at Starfall's behest. I knew it to be mine, with the same certainty that I know my own name. While I cannot speak to what was felt by the others, I can describe my own thought as feeling to my skin the way it felt to my heart. It writhed in my grasp. Its surface was scaled and prickly, yet viscid, yielding and amniotic. It was a singularly unpleasant thought. It felt the way I knew it would.

On the count of three, we pulled. Threads of ectoplasmic clarity came away in our fingers and hands. We had been uncertain what to expect, and remained so. Starfall instructed us to make a second attempt, which we did, with slightly more resolve and a moment to refocus. Starfall counted. We pulled. This second attempt was met with slightly more visible, if curious results: Drizzt found himself suddenly with a number of coins on the back of his hand, but only for a moment; Stormy's nails had become lacquered red; the ink which drips eternally from my own hands appeared now like shivering red quicksilver. Starfall, after storming briefly and returning, counted down a third time. We repeated the process, pulling with all the clarity we could gather.

And there it was. Like the moments of clarity that had formed it, the Everglow stood before us, a column of brilliant, blinding-without-blinding light. Light without source. Heat without flame. Understanding without explanation. From one moment to the next, the third artifact of Starfall's magnum opus, the Ark of Creation, had come to exist.

After some celebration, congratulations, and bit of (predictably chaotic but ultimately harmless) testing in which the Everglow was concluded to function as intended, we adjourned. 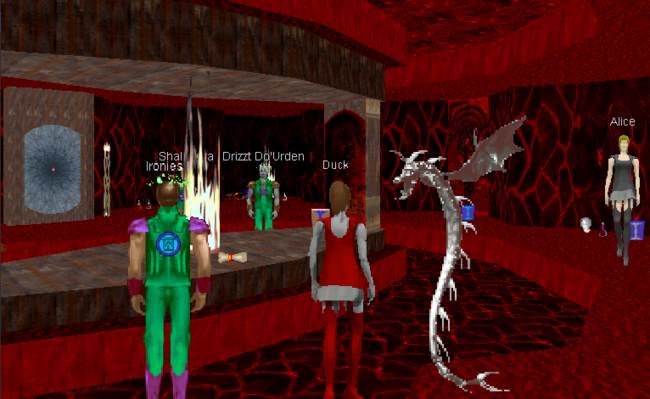