On May 12th, 2016, the Underlight community lost one of its prolific members. Lycaon had been involved with each incarnation of the game: Lyra Underlight, Shades of Truth and the current Underlight. He is one of the reasons the game still exists...the reason we can all still play together.

Here are some of the memories shared by members of the community.

A long time ago, some time around 1999 I think, I had been dropped off at my aunt's apartment to play with my cousins. Not long after I arrived, I noticed my cousin James was playing this game I had never seen before, on the computer. He had a blank sheet of printer paper in front of him and kept glancing up to the screen then back down, taking a large amount notes. I kept asking him questions about the game. He was explaining that his character (Shadowman) was with his friend Armageddon(possibly spelled different) in the game. They were among a large crowd of dreamers as some influential character was preparing to leave the game.

This was my first memory of Underlight, before I ever played. Underlight became a center piece later for James and I to interact through, which minimized the distance we had between us. As a newly entering the game, Shadowman(James) helped me grasp the concept of IC/OOC.. As an 11/12 year old, it was difficult for me to grasp initially. It got Thunderman in trouble with Purple Lace!

Later in years, Lyra had begun an OOC stress testing the game. It was at this point, James and I had the thought on how cool it would be to have a pet Horron in the game. During the stress testing, I ran a packet capturing program while stress testing which James used to create an Underlight server in visual basic/.net. This was the ground work for Shades of Truth, which came to be after Lyra stopped running Underlight.

James(Lycaon) spent several years coding and implementing new features for Underlight: Shades of Truth version. For each new feature he'd implement, he would bring in his character Aethimir to discover and introduce the new features. It wasn't easy for him, or any of us who worked with him, but he and the skill he had was truly remarkable. For those who never were able to "meet" James, he was assisting recently with resolving the Windows Compatibility issue.

I only "met" him a couple of times, but during the time he was working on SoT I contacted him about donating and even through the few emails passed back and forth his love for the game and for the concept was evident. Few people are blessed to do something they love and believe in as much as he appeared to believe in this community...I envied that at the time.

I only knew James, obviously, from the game. He would play with Shae in game as a huge eye with a huge eye brow and raises the brow at Shae, causing her all kinds of grief. He told me he loved to torment Shae with that character. (Meanwhile, irl, I would be cracking up). James had an uncanny way of knowing this game, and how to manuver things to create buzzes. His coding efforts were superb, and his dedication to the game would (during SoT times) take him into all hours of the night, just so he could fix something that the players complained about, or make enhancements to the game that the players asked for. He wanted to create happiness and keep a strong foundation of players.

I had the opportunity to work with the team for a short period of time, and got to know James even more. I knew of his ailments. I knew many of his struggles. Even in the face of losing his foot, he was already making one-legged jokes, and kept an amazing outlook about his tribulations. I'm not sure I could have joked about something like that, if it were happening to me.

Just as mentioned in a previous post, James would pull "normal" players into the game to run numerous tests. I think in a way, he felt we were all part of "the team". He had good 'gaming sense' to me, and really put a ton of work into this game. I was very excited to see that he was working on the game, once again. I knew his heart would be happy, and I knew we would find a fix to that troublesome Win10 issue! 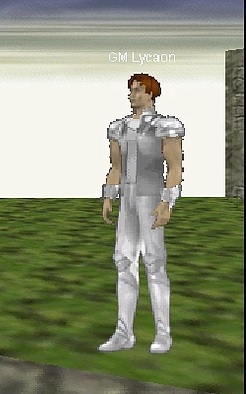