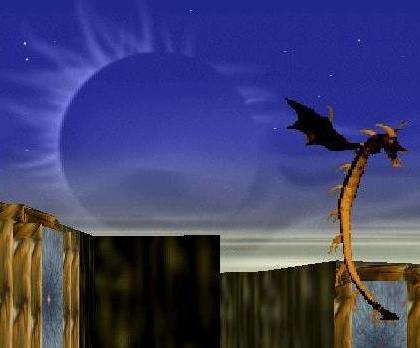 Epoth began drawing symbols outside of the Order's pool in the house courtyard. When the symbols began to grow, house members demanded he cease his efforts. Epoth finally stopped when asked by fellow mare Qutzi. Then one day he passed me by in the Chasm of Souls as I spoke with Catawatch and LadySilver.

He seemed to be examining one of the three spikes on the outer ring of the room. Asked what he was doing, he indicated to the spike and replied "n'rr'gee... Yewvashk" which I eventually confirmed to mean "energy generator." I asked how the spikes related to the inner circle, and he replied "choa," or "chaos." He then showed me a form on the wall and asked what it was, and I replied that it looked like a skull. "Shamblix." Epoth then said "Neki Wafa" or "I want," and then began to chatter incomprehensibly.

While it was difficult to follow, it sounded something like this: "Meh, X aamoa yaee sfiy bxifz qua R p Ja'b v Goj tos ttende'd zoh euouut tefe ij'w dife a an aiq." He asked if I understood to which I shook my head, and he chattered a bit more. "zp youhce dou vop'v if'q viad gaxec, kou j usn iaw's uw Kewqiagu." I told him again I did not understand the dialect, and he explained it was "Maxtra Kotoke Rict" or Greater dark speech. Epoth drew blood from himself and scrawled symbols on the spikes of the room, then traced a circle in the center generator of the room and proceeded to chant further.

The symbols in the room began to glow and chaotic energy began to seep from the spikes into Epoth. "see Dreamer? You don't understand?" he asked. "Draining chaos into Kotoke?" I shivered as the charges flowed through the room and backed away, only for Epoth to say "neki... tzi tese." or "Me... no hurt." The room alighted with colours and Epoth sucked them in, glowing brightly. Suddenly several dreamers ran through the portal, and informed us that Epoth's actions were being felt throughout the dream.

The blood symbols on the walls began to morph and a shadow began to in front of Epoth, forming themselves into an item. After demanding Epoth stop the ceremony, Catawatch opened fire on Epoth, but Star Scream protected the mare. Suddenly Energy drained from Epoth into the shadow and the dark mare collapsed, dropping a chaos rune. Catawatch snatched it away and took it to the Order for safekeeping, despite Epoth's protests. Epoth seemed weakened by his efforts as he ran up to the Order to speak with Catawatch, and fell, his color changing along the way. Catawatch was disturbed to find that the rune would not stay where he placed it. It seemed to creep about when not watched, and as Catawatch observed, moved towards the portal. I was given occasion to look at it. The rune resembled a chuck of oily black metal with a complex rune etched on one side, and the word "Ganodu" scratched into its back.

More chaos runes were discovered in the city. After the first rune was forged in the Chasm of Souls, Epoth employed the generators of the Alliance of the Eclipse to form a second rune, despite the protests of Marzera, Fin Marda and Alyndra. At Marzera's urgings Fin Marda attempted to foil Epoth with Peace Aura, and Marzara attempted to shield Epoth from the powerful generators with her own form. As with the last attempt, a shadowy mass formed from the room's energy, then coalesced in the shape of the chaos rune.

Only a few days later, Maal stumbled upon another rune from a generator in Cairn of Sorrow. "I was genning and it popped out of the gen at the same time as a blood gold shield, in a puff of smoke with arcs of lightning at that." It is described as "a palm sized chunk of oily black metal, with a complicated rune etched on one side of it, and on the back the word "Klatr" is scrawn in maren. The item seems to move around slowly with a mind of its own." Maal confirms that the slippery rune creeps towards portals, but reports that it has not managed to pass by his wards.

Finally a fourth rune was discovered by Bear Crusher in Lambent threshway. Bear discovered it while returning to Bardic in Upfalls Sanctuary. It was "sitting right up on top of that little mound there, as pretty as you please.� It is etched with the maren word "Odpor." The runes seemed to bear the maren words for Life, Death, Peace and Hate. Initially, the Order protected the "Life" rune, the Alliance protected the "Peace" rune, the Radiance protected the "Death" rune and the Shadow protected the "Hate" rune. However, over time the runes seemed to move freely about, being discovered with primes, in ruler quarters, and eventually, in other houses. The rune protectors agreed to different experiments in bringing the runes together. It almost seemed that after each experiment the runes grew bolder. Eventually they were frequently teleporting from house to house, leeching on to house primes. No one could agree on what to do with the runes as they grew increasingly mobile. Eventually they traded places within their respective houses, then made the jump to new houses. There were reports that the chaos runes became bolder with house primes. Fin Marda observed "Pracie" had pulled the house prime to the Portal. The runes also seemed to be appearing in close proximity to house primes. Progress on understanding the Chaos Runes seemed to be waylaid by their tricky behavior and public disagreement in how to handle them. LadySilver initiated a citywide meeting. During the meeting there was much debate over how to proceed with experiments. Because of their growing independence and fears of their growing influence, most agreed they were a threat to the city. Catawatch remarked after extensive study: "There is nothing to say for intention, but rest assured the chaos runes are not a welcome sight in the Dream for most, irregardless of what they may or may not be able to contribute."

It seemed that only Epoth, and possibly the other mares, really knew what they were. Shortly after the formation of the Alliance rune, myself and others discovered Epoth summoning several mares into the empty halls of the Gathering of the Entranced. Foulmoth, Notechis, Kzornak and Ssvatra appeared. The five spoke in "Greater Maren" for some time before addressing the dreamers present. After much confusion over translations, Epoth revealed only a little information about the runes. He said "Itaka isis pal maxtrika," or "item is for power." He then declared "eovocs musit itakas" or "dreamers need items." He confirmed that he spoke of the Chaos Runes. When asked why dreamers needed the runes, he responded "isis maxtrika" or "is power."

Epoth returned to offer a few more clues to the runes with a demonstration, but waxed violent when asked to submit to direct questionings. He drew a circle in the sand of Umbric before many witnesses, then divided the circle in half. He then indicated to the two halves and spoke "Choa... ana tzin-choa" or "chaos and not-chaos." He then blurred the line between the two halves with his claw, and "spira-arc," meaning "the city."

Alyndra interpreted Epoth's presentation. "I think maybe the double nature refers to the Runes as well as to the City. Opposites in an uneasy balance, maybe. It may be that there's something that will need to be done besides just bringing them together. They have a purpose, I can tell that from touching them. I'm just not good enough at that kind of thing to be able to tell what it is. They won't stop moving until their purpose is fulfilled."

Their purpose and movements remained a mystery for a long time, despite further experimentation. Nidus later revealed that during a final experiment, strange artifacts began appearing in threshold, paving way for a new danger and possibly spelling the destruction of our city.