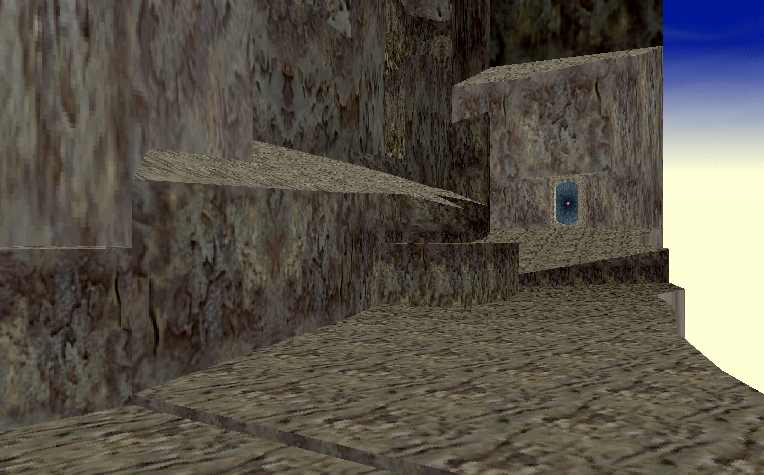 Massive rock walls rise up to delineate a path along an escarpment. Strong winds gust from time to time, causing you to bend against their force. The footpath up the mountain is worn from countless travelers' steps on its way to the Dreamers of Light.

There were 15 Master DreamWrights who set out to create a space for themselves. This was to be Mt. Illapse. As they ascended the mount under progress they created the first 10 rooms. This took 10 days of Dreamtime, a day each of pure concentration to evoke the great Art, Create Plane. As they were quite proud of their work they each named a room after themselves. As you walk up and around the Mt. Illapse, you can see their legacy left behind. They created Camp of Kings, and there paused to rest for a day. There were 5 others yet to have rooms named after them. As they had indeed moved high enough, they started back down the Mt and created rooms off the side of the main trail, skipping one room each time. At the last room to be created, Mirdinir, who was the youngest, miscalculated how tired he truly was. During the creation of this final room, he lost control of the his evocation and the massed Chaos swept him away. The others were tired and now they had lost one of their own. All work on the Mt was put off.

It was centuries before anyone ventured up to start work again. Demetria, our first ruler, was the leader of this new group. It was decided at this time to add more to the Mt before beginning work on the House itself. This allowed access to Gloom Peaks and Cairn of Sorrow. Coltura, who was part of this group, was our very first Guardian, and was the creator of the Art Blend. Forgotten Pits was created first, so named because the Mt had been forgotten by many, Solitude Pits and Tirath's Pit were created next. Two months were spent designing and creating the Keep. The sanctuary wasn't added until the Nightmare Wars, soon after. Two ambuscades, one on either side of the keep were made for added protection. The vault was added for storage of items.

The history of Mt. Illapse by FireKracker, Initiate of Dreamers of Light

Mt. Illapse was the creation of fifteen Master Dreamwrights. They constructed the first ten areas as they worked their way up Illapse. This enormous task took them ten weeks, a week of pure concentration for each area. They were so proud of their work that they decided to name these areas after themselves. As you walk up and around Mt. Illapse you can see the legacy they left behind. After they created Camp of Kings they paused for a rest to regain their energies.

There were five others still in the group who had nothing named after them yet, so they decided to start back down the Mt and create side rooms, once again naming them after themselves. During the creation of the last area, Mirdinir, who was the youngest and had become very tired, miscalculated while the vast energies were surrounding them. He lost control and was swept away into the Chaos. The others were tired as well and losing one of their own was devastating. Work on Mt. Illapse was now at an end. It would be centuries before anyone ventured up the Mt to once again create.

During this period, the very first duel between Dreamers took place. Keminar of Faraway and Trinxan the Illuminated, both having different views on the state of the dream, had a duel in the Amphitheatre of the Sphere. Soon after, open warfare developed throughout the Dream. During this time of war, Markosh discovered how to create the item generators we now have. He placed them throughout the Dream. Dreamstrike, the ultimate death, was now being created n an attempt at bringing peace back to the Dream. The Dreamstrike Masters came in and put an end to the all out Warfare. During this time of forced peace, work once again began on Mt Illapse and the Great House of Light.

Demetria, the first of the Dreamwright group, was part of this new group, and Coltura, the first Guardian of Dreamers of Light, (as well as the creator of the art of Blend), was also part of this group. It was decided at this time to extend the Mt to allow access to Gloom Peaks and Cairn of Sorrow. Forgotten Pits was created first, so named because Illapse had been long ignored and forgotten by many. Solitude Pits came next, allowing access to Forgotten Grotto and Gloom Peaks. Tirath's Pit was created next allowing access to Padeas Pit and Cairn of Sorrow. Two months were then spent designing and creating our Keep. The Sanctuary wasn't added until the Nightmare Wars, a short time later. Two Ambuscades, one on either side of the Keep were built for added protection. The vault was added for the storage items. Over two years were then spent on the design and creation of the Great House now known as Dreamers of Light.

History of Bigibwyns Path by FireKracker, Initiate of Dreamers of Light

This unremarkable stretch of the dream is in no way without history. It has a story of hardship and great victories. Bigibwyn was a soulmaster, not an amazing dreamer but an honorable one. He had a wife in the dreamcity and her name was Felicity. She was a somewhat newly awakened dreamer. She met Bigibwyn while she was searching out a teacher of the soulmaster arts. They quickly developed a friendship that over time blossomed into something more. As their love grew the Darkmares attacked.

A Darkmare by the name of Tehthu had made its way into the West Valley of Totality. It was running rampant; none could seem to stop it. The elders called for the dreamers, the city guard as they were called. Bigibwyn, being a man of honor bid his love farewell, and departed for the Valley. In this stretch of land soon to be named after him, Bigibwyn and the others defeated the Darkmare, collapsing it into nothingness. What he did not know was that his love Felicity, had died in the battle. She had been dreamstruck by the Darkmare. Upon discovering this he raged vowing the destruction of the Darkmare.

Soon after this Tehthu returned, to the same place. Bigibwyn, alone faced him, in a moment of clarity the Darkmare spoke "Your loves dreamsoul is now feeding my brothers, they relish her cries!" Bigibwyn, enraged with grief set upon the darkmare with all his arts! The battle is untold, as there were none to be around as this master teacher of the soulmaster arts and the Mare engaged in battle. But from the stained walls it is plain to see that great arts were the cause of the stained walls within. A codex, written by Bigibwyn was found...Only telling of the love for his women...."I come Felicity! To the very chaos, which spawned this evil. I vow to come to your aid!"

The Truth behind Mirdinir and his little Mishap as told by: LovesLight

As we learned in the history on the Mountain, Mirdinir was the youngest of the 15 Dreamwrights that set out to create the Mountain, and in his attempt to create his own room, Mirdinir was having some problems. After many failed attempts, The Other Dreamwirghts tried to convince the young lad to give up. Legath, a close friend of Mirdinir and just a hair older than Mirdinir had actually created two of the rooms himself, and offered Mirdinir to name it after him. Mirdinir refused and though he promised the others to give up his workings, he did not.

Many Moons had passed and Mirdinir had been working diligently, and finally succeeded.. but there was a backfire. Mirdinir, in his creating had not been sucked into the Chaos as the other Dreamwrights had thought, In all actuality Mirdinir, had been sucked and imprisoned into the walls of his own room. Though this had not been discovered till many years after the Great Loss.

In Fact, Mirdinir's room was not even on the maps of Mt. Illapse, and Many did not know the room even existed. Till one day two young lovers were exploring and trying to find a quaint quiet place to be alone. The two lovers stumbled upon Mirdinir's room, and were quite amazed at the discovery since it was not on their map. They studied the walls with delight and laughed and giggled together anticipating their excitement to tell the other dreamers of their discovery.

Then as they studied more, the young girl, intrigued with the artwork on the walls jolted a bit as the Artwork shifted right before her eyes. A moment passed and low moaning was heard within the walls, the two young lovers were shocked and became frightened yet curious and attempted to make out what it was saying..

The low moaning as they listened closely became louder and a single name was able to be made out.."Mirdinir" and a phrase followed shortly after.."I did it!"

The young couple became more frightened as the artwork began to shift rapidly around them as they headed toward the portal to the wall the young girl being so close to the wall was unable to escape as the wall sucked her up within it and the dreamstate. The young lad ran out devastated with fear.. he found a close friend on the mountain and managed to mumble out some basic details of the even before he woke from the city with fear never to return again.

No one knows what ever became of the Young girl, but later studies and research and "speakings" with Mirdinir after the room was discovered Researchers found out that Mirdinir really did not wish to harm anyone.. he simply wanted to get the word out that he did not fail, and that he did get his room created.

Though rumor has it that Mirdinir knows nothing of the Great Loss and that all his ancient friends are gone from the city. It is said he does not realize that we know about his creation and is still known to haunt the walls of his special room to this day.

Coven of the Echt 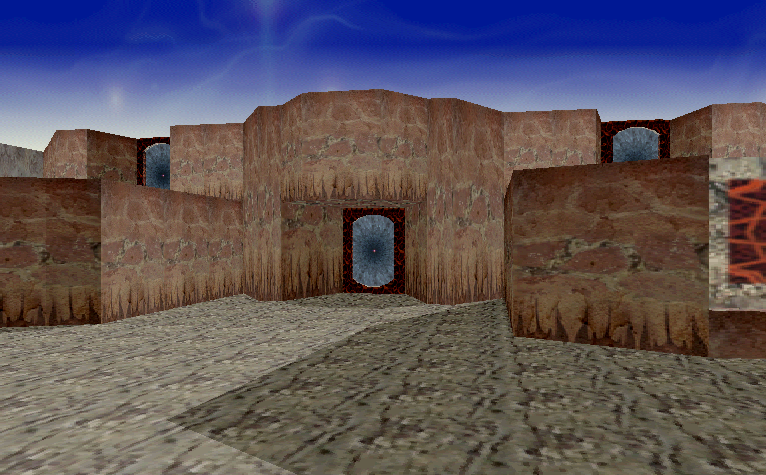