From UnderlightWiki
(Redirected from Library of Souls)
Jump to: navigation, search 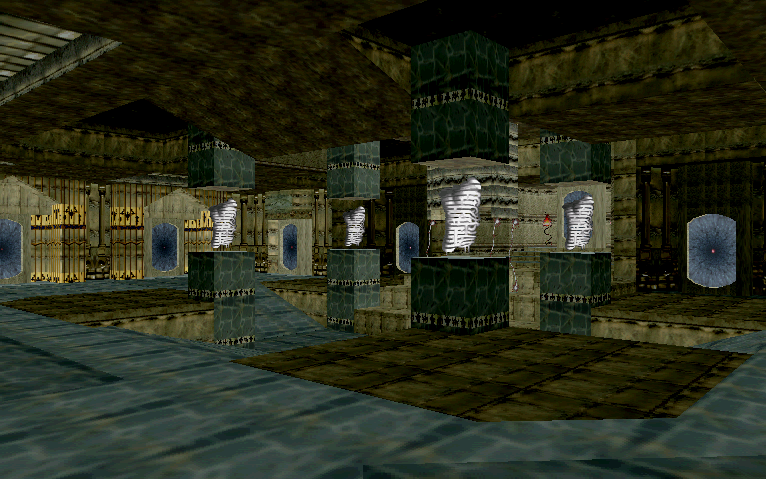 The Library may be accessed from two halls: one between the thresholds of The Trinities and Lambent Flats the other from the hall between the Basin of Stars and the Umbric Plains threshold. The Library contains portals for nine sphered study halls and a gate to the central hub of Threshold Pits, as well as a gate to The Teaching Guild. Each sphere hall is a sanctuary and has three rooms: a main hall and two wings. Often histories, art details, and philosophic dissertations are recorded on codii and stored in the study halls.

The Library also contains a mission board for newly awakened dreamers. This mission board can be posted to by any Ruler, Guardian, or Teacher and can be set to grant energy (Experience) rewards for specific items.

It was known as the Library of Souls in the Lyran era, and the Library of Idoaclese in the Idoaclesian city (Shades of Truth era) and now is called Library of Dreams. Used for nearly identical purposes.

The Library of Souls is a library of course. There are three entrances. Two lead to Threshold and one leads to the Threshold Pits. There are also 10 (?) other portals to different rooms. Two of these lead to the Freespirit Mission boards. The rest lead to rooms dedicated to each sphere and contain many codices inscribed by dreamers. These codices contain much in the way of information on the Dream itself as well as all of its aspects.

The Library of Souls

"Ages ago during the 'Golden Years'of the dream city, the threshold pits were a place of eclectic beauty. Statues filled the halls, streams and brooks covered the landscape, artisans worked their masterpieces on the walls, and knowledge and unity spread throughout. At the apex of this center was the Great Library of Souls in its current position. Each sphere hall with doors proudly open, and each room filled to the brim with "anchored"(hint,hint) codices on the floors about every piece of information that the dream could want. In the anterooms, debates were constantly occurring over knowledge, foci, arts, anything that dreamers wished. Such was the golden age of the library with Master Renrut Nek running the whole show and a group of devote librarians following in his stead.

When the chaos came and the rifts opened up, in succession the center of each ripped straight through the library as well as the pits, causing mass destruction. The first rift almost destroyed the library leaving it in shambles. Renrut Nek was seen kneeling in the rubble trying to place the codices back on the shelves while sobbing softly(he was old people, give him a break). He was there as the second rift hit, and in his dire hope to save the library, he attempted to use his own strength to lift the library back up. He was too weak and as the rift hit he along with the bulk of the library was dragged down to the dark reaches of the pits: a place now of disease, mold, and nightmares.

Time passed, and the Library lay in the pits in a state of disrepair. People avoided it for the strange feelings they got there, and those who stayed were often attributed to performing dark acts. It was indeed a sad time for the library.

After the Great Loss, there were a seldom few who survived the rifts and those who did were weak and needed to regain their strength. One such person was Vodalus, an apprentice to Renrut Nek, and the last remaining librarian. He made it his quest to reform the library(woo hoo) and bring it back to its original place above the pits. He spent 2 long years moving bricks by hand, and slowly using bits and pieces of an art called 'weave' that he had picked up.

The Library finally had been moved up to its former/current location, and in a few days the main entrance hall was opened as well as three of the 9 sphere halls that Vodalus was able to clean. Vodalus in his infinite wisdom realized that soon many more dreamers would be entering the dream, so he left the dream to work solely on the Sphere 4 and 5 halls((come on lyra, get those done with)). However, before he left he took the prominent historian Krynn and appointed him his assistant to the Library.

Weeks/Days/Months? passed and Krynn appointed Luinitari as another assistant, who later was confirmed by Vodalus months down the line. Together Krynn and Luinitari tried/try to get a set of guidelines down for the library, as well as using Krynn's chronicles as literature. The constant thievery and "hollow walls" gives problems to that affect, and Luinitari appoints two more librarians; Incubus and HiRoGIiFiQ to help out with the organization and cataloging of the knowledge.

We await Vodalus's return from the chaos of the sphere rooms to tell us what news he brings and each day we are closer to the art of anchor as well as boards to post on. The Library is a constantly evolving thing and should always be a benefit to the whole dream.

Library Of Souls As Told by Tux

When the City reopened shortly after the great loss, the Library was but one room....no ante rooms for the focuses were opened as of yet... Mysteriously several dreams later, the first through forth study and focus rooms portals opened....much to the city's delight... When the first few dreamers attained the fifth sphere...that room opened also, and later the sixth in the same mysterious manner, much like.... The City was watching over the dreamers and providing for their needs eh?

The history of the Library of Souls prior to the great loss is even more interesting, and I will share a secret with you about it. No one...and I repeat no one has ever been able to come up with a definitive history of the library of old. Many have "speculated" and theorized and made reports... but it remains a mystery for those who wish to research it.