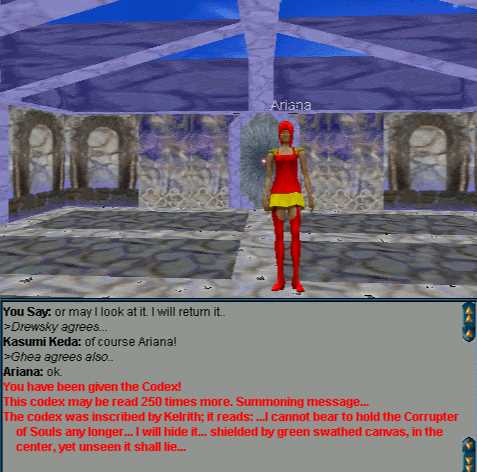 During The Nightmare Wars there was an order named the Seekers of Knowledge whose purpose was to preserve knowledge. To do this they decided to send some of their members out of the dream. They accomplished this by taking awakened and unknowing unawakened souls and swapping their positions. This left the unawakened with no bodies in Cloudsbreak. Not surprising, there were problems and the swaps were unsuccessful. None could achieve consciousness and many wakened bodies were dead or in comas from shock.

So many of the trapped Seekers began to share consciousness with their dreaming counterparts. Many of those dreamers had memories that weren't their own. They knew things and were as driven for knowledge as the Seekers were. This is how many came to be dreaming, but their waking is a gray and formless void.

Ariana: Ariana was one of these unawakened. Her counterpart and joined Seeker was the Gatekeeper, Aprilic, who shared her consciousness for a very long time..

Manido: One day Ariana was walking the Valley near Manido's lodge with Boggen, who got stuck in a hole when she met Manido. (Fayd later fixed this hole, but that's another story.) This was the day Kelrith found the Corrupter of Souls, a vital item needed to cast Tehthu forever from the dream. It was discovered Tehthu had escaped when Kelrith uncovered the Corruptor.

Tehthu: One day Ariana was hunting in the Basins when she was attacked by a marelike creature--Tehthu. Ariana raced to sanctuary just as any newly awakened dreamer would. Before she could reach safety she was bitten by the creature and the bite rapidly became infected. She slipped into a fever and lost herself to the Seeker, Aprilic. She started spouting riddles which in time led the dreamers to attempt to kill Tehthu.

The RItual: The dreamers gathered at the Rings of Passage. Tehthu was summoned. Manido's mentor, Draigon, refused to hand the Corruptor to Kelrith so the ritual could be performed. Manido, already in love with the girl, Ariana, was unable to bear the thought that she would be lost. So he attacked Draigon and was collapsed quickly since he was unsphered.

Some say Draigon or perhaps Kelrith were driven mad by the Corruptor. (Yes, the Corruptor too can drive a dreamer mad just by contact.)

Some say the Corruptor itself tricked them Be as it may, everyone thought Tehthu was being banished into the Corruptor, when in fact it was Aprilic who was banished.

Ariana was soon cured, but at the loss of Aprilic, who to this day remains trapped in the Corruptor, as the essence used in the ritual was not that of Tehthu. Over the next months, many sought to fend off the effects of Tehthu and thought they had won the battle. Dena: The young dreamer Dena, a respected teacher, was suffering from derangement after being lost in chaos for a time. After she jumped into the Rifts the whispering began. Legend gave that if any dreamer sacrificed him/herself into the chaos, Dena would be saved. Ariana made this sacrifice but it was a trick. Dena had already been returned to safety when Ariana jumped!

Ariana later recalled being lost in the Chaos, seeing Aprilic, possessed by Tehthu and his eyes torn from his head. The sight nearly drove her mad. She was alone again, as she had been for so long in her grayness without waking.

Manido was distraught, unable to accept her loss. So he sought out the dreamer, Tiger. Tiger gave him a relic called Incarna Stone. Many tried to stop Manido, but he lept into the chaos in an attempt to save his love, Ariana.

"My time in the chaos was... confusing. I remember no up nor down, no north nor south, only endless swirling blackness and sparatic flashes of color. I knew I had one chance though, for I loved Ariana, and possessed an item close to her heart, a gift I once gave her. as well as the Incarna Stone which fortified my soul and my senses. In this way, I believed, I could somehow find Ariana in the chaos. I was very wrong. I found myself in a great struggle with mares outside the city walls. As they began to overwhelm me, I was caught up in a tide of chaos wreathed in hatred and anger... In the last moments, I was crushed into the city walls, collapsed, and thrown back to the city. The Incarna Stone being lost in the struggle, I was unprotected in the last moments. And this it seems is why my memories are incomplete."

When Manido returned, he was irate and out of his mind. In time he again returned to the Rifts to seek Ariana, finding her in the Temple of Insanity in Dorsal Rift. She thought she was a Nightmare, and acted like one. Manido sat with her for days to tame her and restore her memories. He and LMBE led her into the light with a trail of dried fruit, beef jerky and heady ale. Her friends showed her familiar things but she still couldn't speak the dreamer tongue.

Finally, Manido gave her the Alteror of Aprilic, which allowed her to hold her shape as a dreamer. Though to this day her eyes remain useless, as she sees for another--Tehthu.

The Capture of Ariana, The Corrupter of Souls and The Orb of Calenture by Tux

"The first documented appearance of Tehthu within the Dream was when he attacked a Freespirit by the name of Ariana in the Basin of Stars. He collapsed her, captured her soul and took it back to his lair. Tehthu attacked other dreamers as well . Some were damaged physically others mentally. However none of them were captured as Ariana had been. In time it was discovered that all of those attacked had come in contact with the Corrupter of Souls."

Tux reminds them... an evil Artifact created by a mad Dreamsmith in the closing days of The Dreamer Wars. After finding clues within the Dream it was determined that 3 Guardians of House Calenture and 3 Guardians of the Dreamers of Light would be needed to combine their powers with that of the ancient Dreamwright Aprilic." 3 plus 3 plus 1 Tux takes a breath and rattles on.

"Upon joining their powers they could summon Tehthu and combat him in order to destroy him and release Ariana's soul. The Day of Summoning arrived; the 7 joined their powers and called forth the Demon Tehthu to the waiting crowd of Freespirits and Initiates of House Calenture and the Dreamers of Light. Many were collapsed to Soulspheres during the battle only to restore their Avatars and return to the combat. "Finally with a skillful blow of her gatesmasher, Ghea of House Calenture defeated Tehthu. In the confusion after the battle an unknown dreamer picked up Tehthu's essence. The crowd went to Edgeward Burrows to celebrate the victory, the return of Ariana and to banish the Tehthu's essence and the Corrupter of Souls.

"He took Tehthu's essence from Smoke of House Calenture (who had picked up the essence after the battle) and put it in the Corrupter. Then, with Aprilic's urging, Kelrith used the Dreamer's Stone to bind the essences of both Aprilic and Tehthu to the Corrupter of Souls and used the Orb of Calenture to banish it. Aprilic sacrificed himself to ensure that Tehthu would not break free from his imprisonment.

"Unfortunately, it was later discovered that Smoke had been corrupted by Tehthu's essence. He had given a false Tehthu essence to Kelrith." Tux sighs as he remembers what happened next.

"Kelrith said nothing, since by this time he was enthralled by the evil of the Corrupter of Souls. Since it wasn't the real Tehthu essence the Corrupter still lay in Kelrith's hands. Kelrith was driven temporarily insane by the Corrupter."