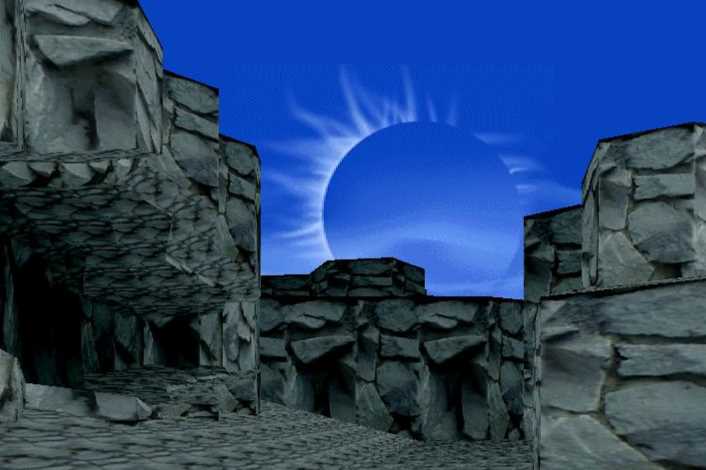 The walls seem to smother you within this dark passage connecting Upper Umbric Plains to the Lower Basin of Stars. Fat drops of water produce echoes that fill the clammy atmosphere, as they plop against moss-covered rock formations. Fetid scum pits, that line the paths well-traveled, lie in wait among st the inescapable gloom.

The Screchethan tribe was the first of the tribes to rule before the houses. It was ruled by a dreamer named Hasenthes. Hasenthes had two sons named Agonarius, and Teng. Hasenthes declared once that upon his death, only one son would rule. The two brother fought viciously for rulership.

Teng won and banished his brother. After 10 years of Banishment, Agonarius returned to fight his brother once again, this time he employed the use of Nightmares. Teng had no choice but to retreat into lost caves to survive. Teng and his tribe were forced to live off whatever came within reach. They spent their times traveling carefully through rooms had not been inhabited by the mares.

Until one day, Teng was confronted by his brother Agonarius. Agonarius offered Teng one way to survive. That was to kill each other. The battle ended with neither brother dead. Both were too tired to make another swing. After hours of resting and consulting, they agreed on peace. Agonarius tried to call back the mares, but they were far too powerful to stop. The mares had developed their own leaders and lords.

So, Teng and Agonarius had no choice but to join sides and become enemies with the mares. Teng developed an insignia to memorize the very spot the where he and his brother agreed on peace. The insignia is currently in Teng's treasure hoard in Lost Caves. The off-centered circle signifies the chaos force in the dreams. The long line to the right represents Justice. The short line to the left represents Hatred. The top triangle to the upper left signifies Teng. The lower triangle is Agonarius. The insignia is to commemorate two brothers bonding to form Justice over Hatred. 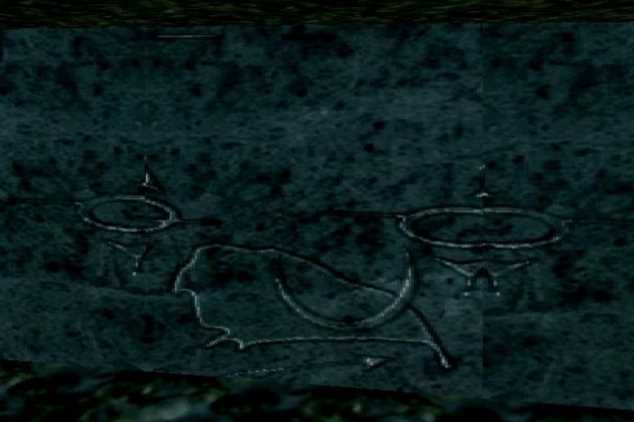 Our study of the Lost Caves carvings seems to have unearthed far more questions than it has answered. We have broken the carvings in the North Sanctuary of the Lost Caves into three sections of study. They are, The "Dream Carving" or the circular carving with a triangle above and below it. The "Guidepost Carving" or the eclipse over the strange shape with the arrow beneath it. Finally, the "Dark Figure Column" or the center column of the Sanctuary itself. The "Dream Carving" appears in three places within the Lost Caves. For the sake of this study it has been dubbed the "Dream Carving" due to its uncanny representation of the dream itself. This representation includes the Dorsal Rift, the upper triangle shaped exactly like the dorsal fin of a shark, and the Caudal Rift, the lower triangle shaped exactly like the caudal fin of the same shark. The rest of the dream is symbolized within the circle itself. The horizontal slashes could very well represent the broken Trinity / Basin Plane. ( It is thought that these planes were once joined due to their near identical nature.) For this to be true evidence had to be found to support it.

The Caudal symbol can be observed by itself on the walls around Teng's Lair right outside the entrance to the Caudal Rift. This wasn't enough.Then a discovery was made that seemed to bring things together. The Dorsal symbol was found by itself in the Chasm of Souls, Spiked Crossing right outside the entrance to the Dorsal Rift. It all seemed to fit. The only problem dating the carving. According to The Ancient, the "Dream Carving" predates The Great Loss and is in fact a symbol showing the tribal crests of Teng and his brother Agonarius as they battled for control over the dream. In fact he was quite adamant about it. It seems that he was Awakened at the time and recalls it all quite clearly. So where were we to go from here. If in fact the carving is the combined tribal crests of Teng and Agonarius and they existed prior to The Great Loss and thus the rifts themselves, we can only offer some speculation on the matter.

So, was Teng a prophet? Did he somehow foresee the forming of the Rifts? Or the "Dream Carving" is the combined symbols of Teng and Agonarius. The Caudal triangle would be the Teng tribal crest itself. It is displayed outside Teng's Lair proclaiming his power. That would make the Dorsal triangle the Agonarius tribal crest and we can only assume that his stronghold was the Spiked Crossing. So why do these symbols match the names Dorsal and Caudal so well? By shifting our perspective we can see that perhaps it was part prophecy and part coincidence that opened the rifts where they did. And it may well have been the presence of these tribal crests ,however misinterpreted from which the rifts drew their names. So where does that leave us? The "Dream Carving " does represent the dream but a dream embattled by two brothers. Not our current dream embattled by two Rifts.

According to The Ancient, the Lost Caves carvings date to before The Great Loss. The "Dream Carving" (the circle with the triangle above and below) shows the crests of the two brothers, Teng and Agonarius, as they fought over control of the dream. The Lost Caves were the stronghold of Teng's forces. This is evident by the carvings throughout the caves. It is my belief that the Chasm of Souls was the stronghold of the forces of Agonarius. This is based on the markings of Agonarius in the Spiked Crossing.

This leads our studies to the second carving in the Lost Caves Sanctuaries... "The Guidepost" (the eclipse over the strange shape with the arrow beneath it). It is my belief that this carving shows the way to a once secret portal. The portal in the Lake of Tears, Edgeward Barrows. Let me take you back to a time when a war between two brothers was tearing the dream apart. Agonarius lead a force of Nightmares. His goal? To control the dream. His brother Teng lead a band of dreamers against this menace.

When the time was right Teng gathered his band together and held council in the North Sanctuary of the Lost Caves. Here he revealed to his band the secret that would turn the tide of the war to their favor. You see... Edgeward Barrows was a battlefield... It was here that Teng fought to contain Agonarius's minions and finally reach his brother and put an end to the madness. With his army carefully hidden inside the Cave road, Teng lured the mares of his brothers army to the Lake of Tears. Playing the easy target and swimming out into the lake seeming to make a fatal mistake.

The Mares followed thinking of an easy kill. Teng vanished under the waters and seemed to drown. As the mares closed in looking... suddenly they were in the Cavern of Tears, surrounded by the armies of Teng. Not a single mare escaped this trap and the secret of this portal lasted for a long time. It was in fact this trap that gave the forces of Teng the edge they need to finally vanquish Agonarius and bring a chaotic peace to the dream for a brief time. The mares continued to enter the dream but without Agonarius to lead them they were easy targets for the wary dreamers. Why put this secret on the walls of your stronghold? Inside the Sanctuary it was safe from the prying eyes of the mares.

Teng never need to fear discovery. But what this? How do I know the shape behind the eclipse in the carving is the Lake of Tears? To answer this you need only to travel to Edgeward Barrows. From there go to the Lake of Tears just north of the Earthen Sanctuary. Face the eclipse in the sky and follow the arrow in the carving ( the one that points to the right) you will soon find the "once" secret portal of Teng. 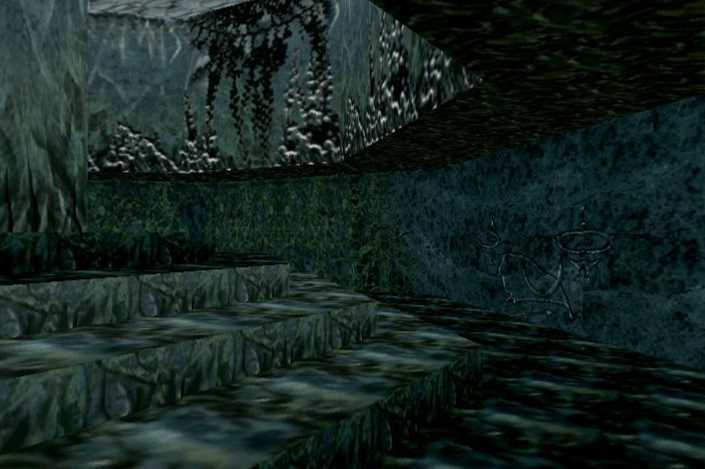 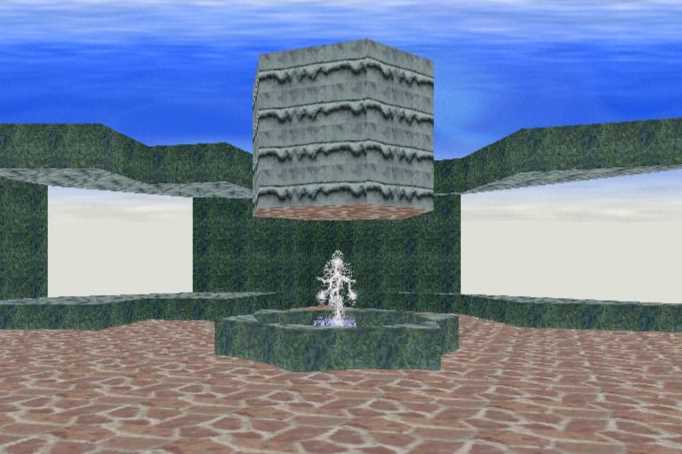